At 4.12 AM this morning Friday Jan. 27/01 (Lminyananm) The Israel Dog Unit received an emergency call for help from Meir, Chief of Operations for the Shomron Police Rescue Unit: “Mike, we need your help, a bus crashed through the guard-rail near Maaleh Levona, flipping down the steep hill to the valley below.  Two were found dead, four others were found injured and at least two more people are missing. They flew out of the bus as it flipped over and over again and we can’t seem to locate them. Can you bring dogs with capabilities to find living people? Can you also bring cadaver dogs to recover possible dead people?” Naturally we agreed to come with dogs. I woke the guys up immediately. Within 30 minutes we were ushered in by police and army on to the slope where the bus had landed, hundreds of yards half way down toward the valley. We had 8 handlers, 5 rescue dogs and one cadaver dog with us. The heavy rain and mud combined with the steep incline making this a complex search. By 7.00 AM we gave the ok that the area was clear, everyone had been accounted for. I am proud to say that our volunteers operated swiftly and professionally. The army dog unit only showed up after our dogs and handers had been on the scene for more than an hour. 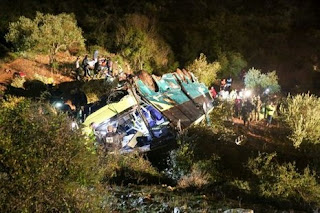 Our noble volunteers deserve all the credit in the world. They had only returned from a search in Ashqelon hours before this emergency call about the bus at Maaleh Levona. We had worked almost non-stop in Ashqelon from Wednesday afternoon until Thursday evening, looking for Jeremy Maxim.
(Jeremy has yet to be found, please see attached photo and help forward wherever you can online and offline). Our volunteers worked with the dogs and our drone near the North Ashqelon shore through the night and most of Thursday, returning back to Sde Bar and to Tapuach base. After a few hours of rest they were off again to save the lives of those injured in the bus crash. 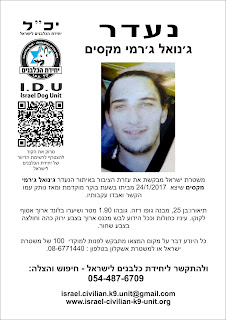 
Dog training this week will be G-d willing on Sunday Jan. 29,17 Lminyanam as follows:  10:00 AM in Gush Etzyon.And later:  4.00 PM in Kfar Tapuach. If you would like to come please confirm a time-sot in advance and please call once again before leaving to the training to make certain all is still on schedule as planned.
Posted by Mike at 12:18 AM